skip to main | skip to sidebar

Many things have continued to occupy my time and leave me with none spare for blogging! Once again a random update post will have to suffice.

And so austerity finally lands in Gloucestershire!

Gloucestershire County Council has reviewed its supported bus network in the county and this time its serious! A picture of Dr Richard Beeching appears foremost in my mind but the general public seem to be almost entirely unaware of the scale of funding withdrawals heading their way.

The latest tendering round has come and gone and whilst we still have work for 9 buses, many of our longstanding routes will either be cut, combined, lost, renumbered or reduced.

Cut is the 230 from four journeys six days a week to 2 journeys on a Tuesday only!

Lost are routes 28 29 and 29A to Stagecoach who will renumber whats left as route 69.

One of the major events that occurred during my latest period of absence from the wider world was the first stage of DDA legislation becoming active.

The criteria for this change was that any vehicle under 7.5 tonnes and over 22 seats must have been fully accessible from 1st January 2015.

Essentially this was a death sentence for the Mercedes Minibus on which we had relied since Cotswold Green began and accounted for most of the vehicles changes last year! And so we said farewell to N912 ETM, N913 NAP, N951 NAP, N966 NAP, N967 NAP and S530 RWP.

All, except N912 ETM which went to a preservationist, went to Chepstow Classic Buses.

I have kept one though! N730 RDD which did some stirling work for us right up to the end of 2014 remains as a possible preservation project when time and funds permit!

Stage two of the DDA legislation hits at the end of this year seeing off the last of the non compliant single decks (T404 UCS, N64 KBW and R976 XVM). We have already had a clearout of other vehicles that did not comply with W483 OUF, W605 CWX, R448 LGH and M101 WBW going to UK Bus Dismantlers at Bromyard.

With all of these departures we welcomed the arrival of some compliant vehicles to the fleet bringing new levels of complexity and different headaches!
Posted by Rob Arkell on Saturday, November 14, 2015

And so I return to the Bloggosphere after another period away! I find it difficult to write when furious or when I have no time to think rationally about events. Both of these states of existance sum up where my mind has been lately.

But Cotswold Green continues to bumble along doing what it does best, serving its communities and providing a home for displaced persons!

Now I have reunited myself with the Blog and enjoyed reading some of the posts, perhaps in the same way as finding your teenage diary in a box in the attic, I will endeavour to add further to the history of Cotswold Green...
Posted by Rob Arkell on Saturday, November 14, 2015

As the Optare chapter begins there is the closing of another chapter. H843 NOC has finally been taken away for its final trip to Barnsley (bus Valhalla).

H843 NOC was the last of our first generation Dennis Darts and was there at the beginning of Cotswold Green. It was also previously at the spearhead of Ebley Bus as their expansion of local bus services in the Stroud area gathered pace. It was acquired directly from Warrington Transport by Ebley Bus (one of four purchased from this source).

Despite pressure to send it to the scrapyard a couple of years ago, I had it sent to a farm a couple of miles away with the intention of bringing it back when the time was right!

I had driven many miles in it and it had carried many passengers during its lifetime. I am concious that I appear to have drifted into writing an obituary for an old friend but perhaps that just sums up how attached to it I have been!

I have been resisting the temptation to follow the crowd and use the Optare Solo to start the low-floor conversion of the smaller vehicles in the fleet. I had taken some pride in the fact that we were possibly the only local bus operator in Gloucestershire not to have one!

I lived in hope that an alternative would appear on the market but as the deadline for full conversion of the fleet to fully accessible vehicles looms ever nearer, no such practical alternative has appeared.

And so the opportunity to acquire two of these machines presented itself at a convenient moment and so now they have arrived. All thanks to the continuing effect of the Veolia collapse on the second hand bus market!

And so CN06 BXB and CN06 BXG have joined the fleet. They will be painted this week and should be on the road in a few days time!
Posted by Rob Arkell on Wednesday, April 25, 2012

And the fuel crisis continues!

Our regular petrol station is out of fuel again and has been for 36 hours now! It all started with a foolish remark from a politician, who clearly has no experience of living in the real world, to try and undermine a trade union's threat of strike action. Did he not understand that a majority of drivers seem to treasure the freedom that the ownership of a car can offer more than life itself! These people then immediately headed for the nearest petrol station with a boot full of jerry cans like a swarm of locusts decimating a field of crops!

Once a petrol station runs out of fuel, a real sense of panic grips the nation as people hunt for an available supply. Ironically using more fuel to find more fuel!

Any petrol station with a supply is then decended upon, thanks in part to social media and mobile phones, leading to lengthy queues and eventual exhaustion of the supply. The delivery network just cannot keep pace and so re-supply takes hours or even days longer than usual.

So how did this effect us? Well, fortunately we had a spell without the use of our usual fuelling location due to a faulty computer system that had been installed. This took a week to sort out and we had to find alternative supplies. All bus workings have the ability to call at alternative sites without travelling out of their way. Not my prefered scenario but effective none the less.

Some drivers have been able to use their Tesco Clubcards for a change instead of their Shell points cards!

And now it has been announced that there will be no strike this Easter! How long will it take to return to normality...
Posted by Rob Arkell on Friday, March 30, 2012

Gloucestershire County Council has recently put a number of routes out to tender. Some were ours, some operated by others and some new!

The results are in and I am pleased to say that we won more work than we lost!

We will cease operating the following routes from this date: -


We will start operating the following routes: -

How did we live without the internet years ago? Now rapidly approaching my fourth decade I can still remember life without it but I never remember feeling short of information! Maybe everybody talked more or perhaps our interests were not so far reaching!

I occasionally put "cotswold green" into google just to see what has been put online. The internet seems to have a version of everything that is talked about in the world today and this can give me an idea of the general public's perception of how we are doing.

Today just made me think just how much information is out there! My search, narrowed to the past week only, gave me the following sites in less than a second: -

A broader search would have revealed hundreds of items, once I had filtered out references to paint colours and property pages refering to a road named Cotswold Green!

Because there is so much information relating to just one small bus company in Gloucestershire it makes me think about the sheer volume of information available at my fingertips. Perhaps this is the main difference since the internet has come of age, I can literally find information about anything that pops into my head without leaving the comfort of my sofa! But what did we lose?

Following the closure of our local VOSA Testing Station in Gloucester, we have been forced to find an alternative location for our MOT tests.

Buses require a class 6 MOT test and so for us it has always been nessecary to go to a VOSA facility. However, in response to the closure of our nearest VOSA facility, we have the option of two private facilities that are actually closer! Both of these testing facilities are on the premises of large haulage firms and are only a couple of miles apart!

We have now sent three of our vehicles to the C M Downton's facility at Moreton Valence and, I am very glad to say, that all three have passed with flying colours!

The closure of our local VOSA facility has left us with additional costs as there is a lane fee to pay in addition to the MOT test fee. Another way of reducing the odds of actually making a profit! We have no real choice in this matter as the nearest official VOSA sites are now at either Calne or Avonmouth and so the additional fuel cost exceeds the difference in fees.

On the up side, when booking a new test you actually get to speak to a real person who actually works at the site not a call centre miles away!
Posted by Rob Arkell on Wednesday, February 15, 2012

I do like a bargain! After a trip to UK Bus Dismantlers at Bromyard to see one bus that was for sale, I found another one that I liked more. The original viewing was a run of the mill ex Veolia 1996 Dennis Dart which, on first inspection looked quite tidy. A closer look revealed some issues around the rear windows and so I quickly decided that this was not worth the bother and anyway its MOT was shortly due to expire.
We needed an engine for L310PSC and a suitable donor was about to face the cutting torch so a quick deal was done (yet another Veolia vehicle). Whilst briefly inspecting this engine in situ, something caught my eye!
Hidden at the back of the yard was this little gem! I admit that on the outside it looks like a bit of a wreck, but it was easily restorable and Low Floor! An offer was made and so job done. 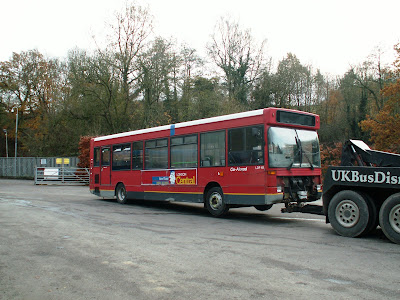 UK Bus Dismantlers has recently purchased a large number of vehicles from Veolia, who have been either closing down or selling off their bus operations in recent times. There are many operators both large and small who have benifited from such a large supply of vehicles, mostly Low Floor, being available.
Our new dart had some new panels and a repaint and is somewhat transformed into the vehicle pictured below: - 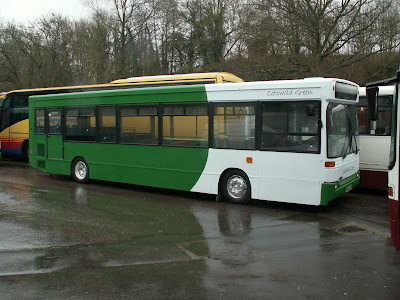 The seats have now been retrimmed and she is off for an MOT test on Tuesday. If all goes well, and after a couple of days of local testing, this shiny bus will find itself on the 881 route between Cirencester and Tetbury.
Posted by Rob Arkell on Tuesday, February 07, 2012

Vehicles That Have Left The Fleet